The Emperor - Following Ambitions with Vision and Autonomy 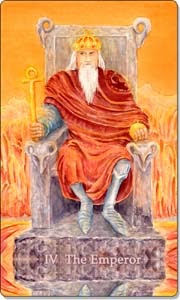 The Emperor is the archetypal authority figure; he represents the father, the boss, government, police and the law.

His purpose is to bring order to chaos, create structure and solid foundations, organise and manage people.

With his visionary ideas and strategic thinking, the Emperor also sets big and bold goals for the future, which he is determined to achieve.

Astrologically, the Emperor is linked to Aries; with his fiery energy he follows his aspirations and ambitions with decisive action fuelled by enthusiasm, confidence and a distinct competitive streak.

If necessary, he doesn't shy away from conflict always believing that conquest and victory are within his reach.

When the Emperor appears in a reading about your work and career, he may ask you to

Promotion and success may well be within your reach, but also remember that the higher you rise, the deeper you can fall.

For the Emperor, failure isn't an option, but don't let your achievements get to your head.

Avoid: impulsiveness, lack of foresight, mistrust, being a control-freak, getting entangled in details, perfectionism, fear of delegating (tendency to micro-manage), mistrust, stress and burn-out, winning at all cost, unfair tactics (eg. backstabbing), power-tripping, abuse of power, complacency, running out of steam, being emotional.

Tarot Magick: meditate on the image of this card to manifest
- increased confidence - new ideas - a promotion at work - success of a project - effective leadership skills

What message does the Emperor hold for you in your work and career?

Transform your life this year:

Tarot Readings - Insightful guidance when you need it
Learn Tarot - A magickal, inspirational tool for life.

For more inspiring quotes and affirmations for each card, check out my ebook Empowering Messages from the Tarot

"The secret to happiness in your work is to find a job in which your neurosis is constructive."

Tarot for Business by Christiane Hayes is licensed under a Creative Commons Attribution-NonCommercial 4.0 International License.