Six of Wands Messages on Leadership 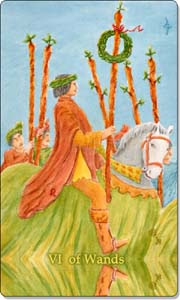 The traditional meaning of the Six of Wands relates to accomplishment, public recognition, praise, victory and success, but the image also depicts a leader and his followers.

This card can suggest a recent promotion into a managerial position, or having gained more followers/fans/investors, who openly support your project or business venture.

Either way, effective leadership is an important means to get to this point, especially leading by example.

What leadership lessons does the Six of Wands teach us? The rider on the image seems to take success in his stride and keeps moving forward. There is no time to be complacent. He's certainly not resting on his laurel.

When you draw this card in a reading, it may indicate an achievement, but it can also ask you to develop and nurture some leadership qualities, that can help you reach your goal. Which ones do you need to focus on? Here are some quotes relating to the Six of Wands, which may give you a few ideas:

"It is better to lead from behind and to put others in front, especially when you celebrate victory when nice things occur. You take the front line when there is danger. Then people will appreciate your leadership."
- Nelson Mandela

"If you want to see the true measure of a man, watch how he treats his inferiors, not his equals."
- J. K. Rowling

"Innovation distinguishes between a leader and a follower."
- Steve Jobs

"A leader is best when people barely know he exists, when his work is done, his aim fulfilled, they will say: we did it ourselves."
- Lao Tzu

"The challenge of leadership is to be strong, but not rude; be kind, but not weak; be bold, but not bully; be thoughtful, but not lazy; be humble, but not timid; be proud, but not arrogant; have humour, but without folly."
- Jim Rohn

Affirmation: I achieve my goals by leading others towards greatness.

Transform your life this year:

Tarot Readings - Insightful guidance when you need it
Learn Tarot - A magickal, inspirational tool for life
Tarot eBooks - Great value, innovative Tarot study material
Make sure you subscribe to my updates via email or RSS feed to receive the latest content straight into your inbox.

"The secret to happiness in your work is to find a job in which your neurosis is constructive."

Tarot for Business by Christiane Hayes is licensed under a Creative Commons Attribution-NonCommercial 4.0 International License.